DID YOU KNOW THAT ? PINATUBO MONSTERS: (PHILIPPINE ISLANDS) 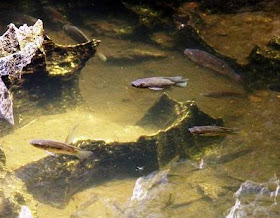 In 2002 a school of large serpentine creatures terrorized scores of Philippine fishermen and their families, and nearly pushed their once quiet village to the brink of starvation.
One of the more interesting aquatic phenomenons to hit the world stage hails from the Zambales region of the Philippine island of Luzon, where as many as five large creatures have been reported swimming in the Tikis River, near the former mining village of Buhawen.
Dubbed by the local Aeta tribesmen as “Pinatubo Monsters,” these animals have sent ripples of terror throughout the fishing villages located in Tikis river basin. Described as huge, black, serpentine creatures — much like Florida’s MUCK MONSTER — the Aetas claim that these animals are unlike any eel, fish or snake that they are familiar with.
The first accounts of these animals date back to November 5, 2002, when an Aleta boy apparently mistook one of the animals for a floating log, only to become consumed with terror when the beast moved. The second major encounter occurred on January 12, 2003, when a cadre of eyewitnesses claimed to have seen a seven-foot long, three-foot wide, black animal undulating silently down the river.
Although there are no accounts of malicious river monsters in any Aeta lore — unlike the voracious, brain sucking MAMLAMBO or prehistoric MAHAMBA, which are said to inhabit African rivers – the tribal leaders have taken drastic actions in order to avoid any civilian casualties.
In the small village of Labuan, children are no longer allowed to bathe or play in the river and men and women have ceased fishing altogether, forcing the members of their community to subsist on a diet whose sole source of protein consists of captured frogs.
In an article written in the Philippine Daily Inquirer on January 14, of the same year, village councilmen Joel Serrano and Alfredo Banos, implored the Philippine government to send assistance in the form of “biasang tau” (scientists) in order to help illuminate this mystery.
The call of the councilmen was answered by the Bureau of Fisheries & Aquatic Resources (BFAR) regional director, Remedios Ongtangco. Ongtangco chose 43 year-old Nelson Bien — who had already rescued the residents of Luzon’s Nueva Ecija province from an extraordinary 12-foot long eel — for the job.
Bien, who served as the chief of the fisheries resources management division of the BFAR in Central Luzon, arrived in Labuan less than a week later. Upon his arrival, the community’s tribal leaders immediately escorted the scientist to the Tikis River.
After a cursory glance through a pair of binoculars, through which, according to most reports, he saw nothing, Bien wasted no time in concluding that — based soley upon the Aetas’ accounts — the phenomenon in question was most likely not a group of large AQUATIC ENIGMAS, as had been described, but a school of the relatively common fish known as tilapia, who had probably congregated in groups of 500 or more.
The accounts all seem to end on this note, giving skeptics yet another excuse to practice their patented condescending smirk, but only a blithering fool would assume that an entire community — who have for generations lived on the banks of the Tikis and whose primary sources of nourishment came from the River — would confuse a school of relatively small (not to mention well known) pan fish for a quintet of 7-foot long, 3-feet wide, inky black, serpentine creatures.

Some researchers have suggested that the creatures may be a mutation spawned by the massive mercury levels said to be in the river. Whatever the origin of these beasts actually turns out to be, the fact remains that the Aeta villagers continue to fear the serpentine monsters of the Tikis River.
DES TAN at Tuesday, May 31, 2011
Share
‹
›
Home
View web version